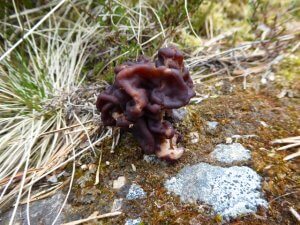 The false morel – do not eat!

For me, the arrival of the false Morel is the first notable event in the fungal calendar. This is one fungi which can easily be overlooked. It might seem odd to include the fungi kingdom in a scottish wildlife feature but the fungi in the woodlands are a vital part of the ecosystem. Here in the Cairngorms they can’t be ignored.

At a glance the False Morel might appear as some nasty dog mess at the side of the hiking trail. However, with further investigation they are an interesting mushroom. Usually appearing sometime in April they often occur in pine woods, on sandy soil. Much of the Cairngorms National park is covered in woodland on sandy soil so they can be quite a common sight. Unlike other edible Morels with their honeycomb structure, the False Morel has a highly convoluted cap. This can vary from yellow brown to dark reddish brown with its stalk being an off white colour.

The False Morel has been described as the “puffer fish” of the fungal world and one most definitely to avoid, that is, unless you’re very brave. This is why. Gyromitrin, a chemical in the fungi, reacts with the stomach acid to form mono methyl-hydrazine, other wise known as rocket fuel! The symptoms of poisoning follow the same protracted path as those of ingesting the Death Cap, the most toxic of all fungi. The first stage is a 6 to 12 hour latent period. This is followed by up to 6 days of unpleasant “gastrointestinal disturbances” which can also be accompanied by seizures.

Next comes an apparent period of recovery but by this time liver damage has occurred. In serious cases this is followed by delirium, coma and possibly death. There are large variations in the way individuals react to the toxin which seem to be down to genetic makeup. Despite this, it is still regarded as a delicacy. In some European countries, especially Bulgaria, it is still collected in quantity. Repeated parboiling in fresh water is the tradition way of dealing with the toxins but this doesn’t completely do the job. Should you be preparing any quantity of them, beware of the vapours. Your kitchen could fill up with rocket fuel vapour! Not surprisingly an increased number of countries are banning its sale.

So as not to be confused, we’ve added below an example of an edible morel mushroom. 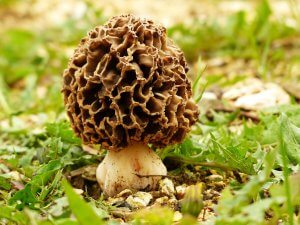 An edible morel mushroom – highly prized in the foraging community

Fortunately the false morel fruits outside the main shrooming period in the Highlands. Most foragers come from July onwards. They search the woods of chanterelle and cep mushrooms. Bounty beyond belief can be found in the woods. You must always be aware of the Scottish Outdoor Access Code and pay close attention to the Scottish Wild Mushroom Code

For an introduction to safe and responsible foraging contact us for details of our Fruits of the Forest weekends (September and October). 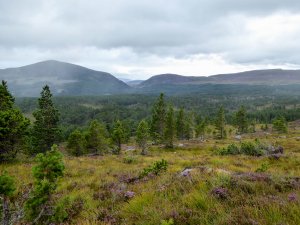 Stories and legends from the Cairngorms

How to turn a walk into an adventure