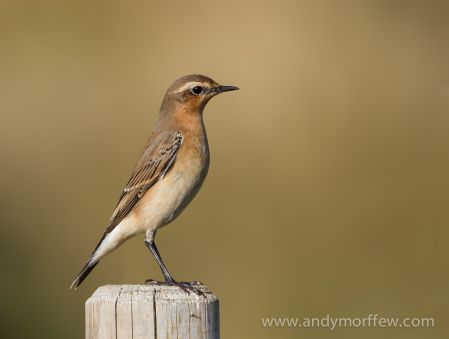 If you go birdwatching near Aviemore, you’re bound to want to head up into the mountains. There are several species of bird you won’t find in your back garden which you’ll be on the lookout for. The Wheatear is probably one of them.

With the eyes on the ground and the mind on the conversation, the little Wheatear ahead of you flitting from one boulder to another can easily be missed. Take a closer look and it will reveal itself as a most striking little bird. A little bigger than a Robin, the most obvious feature of this bird is its white rump and tail. Its name has nothing to do with neither “wheat” nor “ears” but is a corruption of the words “White” and “Arse” by embarrassed Victorian’s. The male’s breast is of soft pastel tones of pink and bluff. The wings are black and its back sports a smart cape of grey. This is all topped of with a striking bandit like black eye stripe

It is one of the first to arrive in our mountains having completed a huge journey. The wheatear travels from sub Saharan Africa, across the Sahara, over the Atlas Mountains, the Mediterranean and up through Spain and France. It finally arrives in our mountains in April. On it’s migration it can cover up to 500 miles in a day. Not bad for a one ounce bird!!  Some birds make a journey of 30 000km (18640 miles) – one of the longest migrating flights known.

They have one of the most extensive breeding ranges of any bird being found from Alaska to Iran. In Scotland they are often found on unimproved grassland between 300 and 800m up but have been found to be breeding on the highest ground in the Cairngorms at up to 1200m.

At one time in Sussex they were regarded as a delicacy and were trapped by shepherds for the restaurant tables of Lewes, Brighton and Eastbourne. Few birds now inhabit these parts due to loss of habitat but this is certainly not the case for the Scottish Highlands where the breeding population is estimated to be between 35 000 – 95 000 breeding pairs. They are one of our most common upland birds and one you are likely spot on your mountain journey.

Other species to watch out for in the Cairngorms area:

For details of private guiding for birdwatching opportunities try this page on our website.

If you would like to join a hiking group interested in wildlife watching opportunities try this itinerary in the Cairngorms National park.