Get an early Snow Alert! 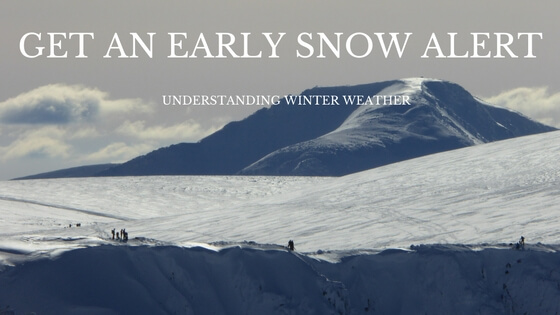 Understand Thickness and get an Advanced Snow Forecast.

Whatever winter sport is your passion, getting the most out of the UK winter season is inevitably about being opportunistic. You need to jump to it when the conditions are right. Getting into the hills requires some degree of planning. You need to learn all the tips you can on about how to forecast snow. When forecasters tend only to predict 3 days in advance, it doesn’t give much time to get organised.

This changes though when you understand atmospheric thickness and how it relates to the 5 day synoptic weather charts. Have you ever noticed those numbered dashed lines hiding behind the isobars? (see below – on Bracknell charts predicting 36 hrs or more ahead)  Well they represent the thickness of the atmosphere and this directly relates to the temperature of the air-mass. Bear with me, here’s the techie bit.

Air pressure at sea level tends to equalise at around 1000mb. The colder the air, the greater the density and hence you need less of it volume wise to create that 1000mb pressure. Therefore the atmosphere is thinner at the poles than it is at the equator. Meteorologists have realised that by measuring the altitude at which the air pressure halves (i.e. is 500mb) they can plot the movement of cold air from the polar regions towards the equator. In the northern hemisphere these thickness lines represent the southern limit of cold air moving down from the north.

As far as wintry weather in the UK’s mountains is concerned it’s the 528 line (equates to 5280m) you want to watch out for. When it crosses the UK you can expect snow on the hills at least. They are a bit like contour lines. The closer together they are the more the marked the temperature change but if, lets say, the 528 line is 300 miles out to the west over the Atlantic you might be at least be expecting snow on the highest tops in Scotland. If the 510 line approaches the UK wrap up warm, very warm! The charts predicting the arrival of the “Beast from the East” had the whole of the UK enveloped beneath the 510 line!

For those of you who can jump to it and might be in need of accommodation in the Northern Cairngorms area check out Fraoch Lodge.

How to get the most out of your trip to Scotland