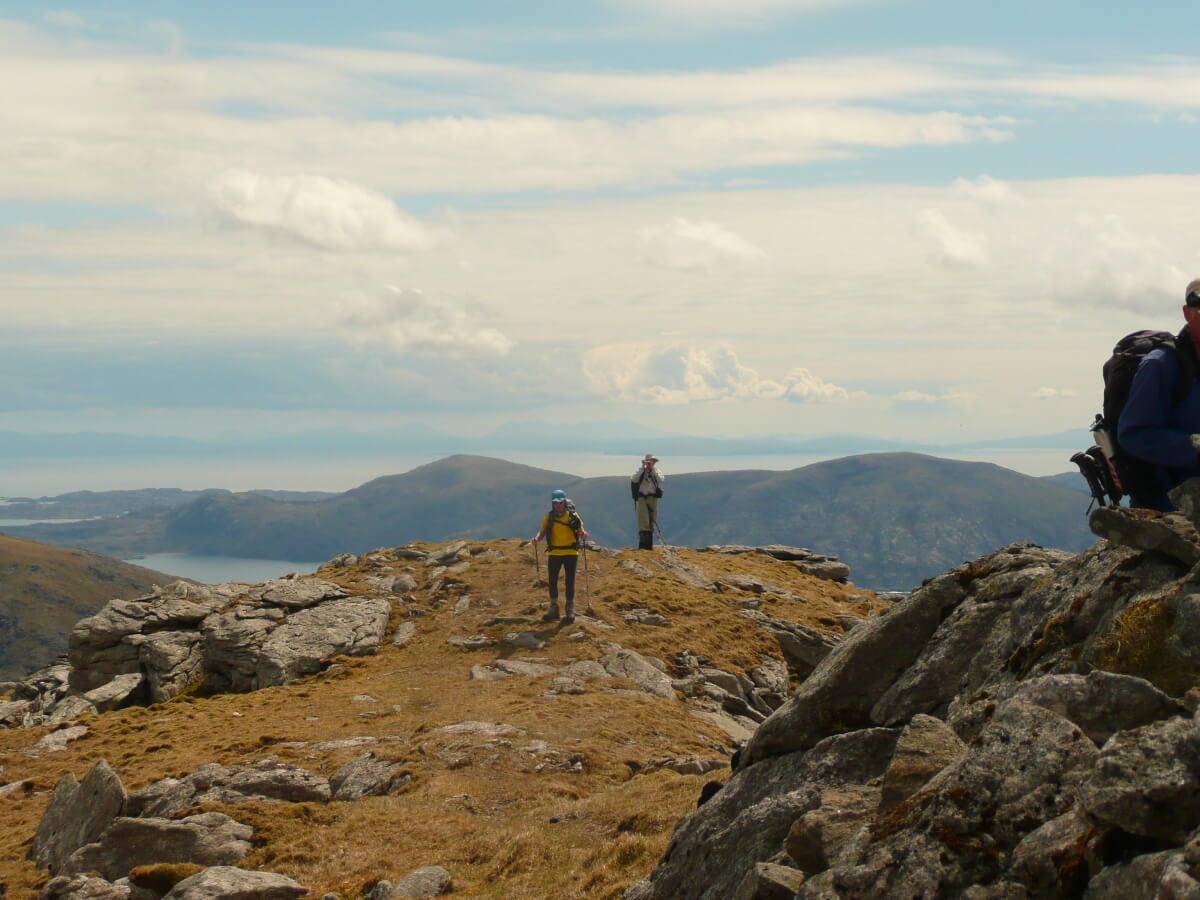 I’ve selected images of the Hebrides taken during our Western Isles Wilderness guided walking holidays since 2014. I’ve not put these photos in any particular order of favouritism. They are just the best shots I’ve seen from 3 trips to Harris and Lewis. If you’d like to nominate different images, please just let me know and I’ll either add them or replace my selections with yours. 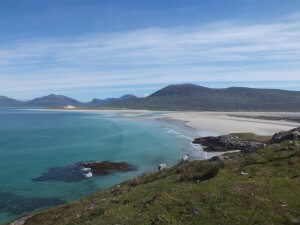 1. Beautiful beaches at Seilbost and Luskentyre on Harris in the Outer Hebrides. 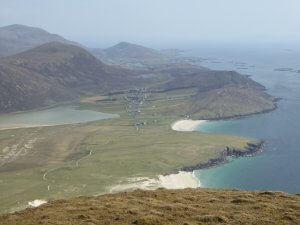 2. The hills of Harris (which we explore on our Western Isles Wilderness itinerary) offer stunning aerial views of the beaches 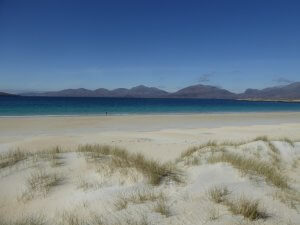 3. With colours like these it’s no wonder numerous artists seem to have moved to the Hebrides and produce artwork inspired by the seascapes surrounding them. 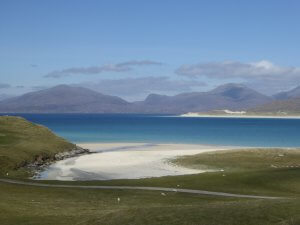 4. What a view this beach has to offer. The hills in the distance make this beach so much more attractive to the eye. 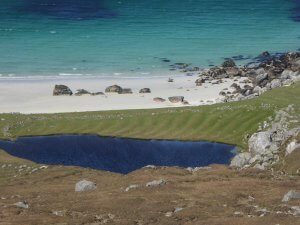 5. Where are all the people? Exploring the beaches of Harris in Spring is still a joy when you have it to yourself. 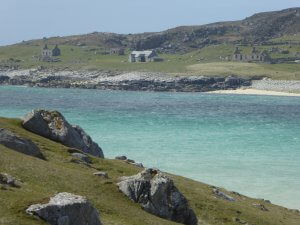 6. When visiting the Hebrides, you’ll probably come across a lot of ruins (though there are also some very new eco-friendly buildings being put in place as well). It’s a shame to see the houses in ruins, but it is a visible reminder of the history of the clearances and the hardship of life in the islands. 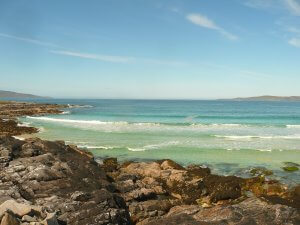 7. Sun, sea and sand combine to give us the peaceful shoreline by the beach on Harris. 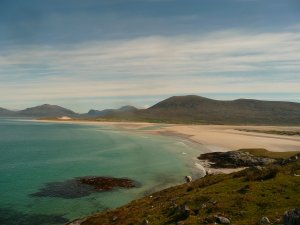 8. Glorious stretches of sandy beaches in Caribbean colours but without the crowds. 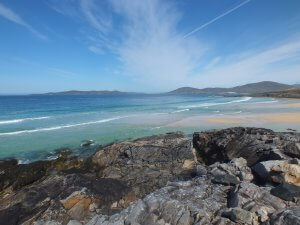 9. The wisps of cloud and the intense turquoise colour of the sea with the rocks in the foreground make this a very attractively composed image. Makes you think more of the tropics than the Hebrides!

Other aspects of the Hebrides 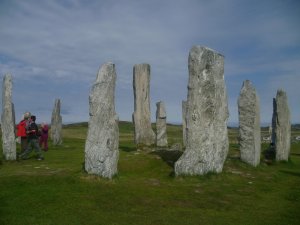 10. The most famous stone circle in the Outer Hebrides – the Callanish Stones on Lewis. 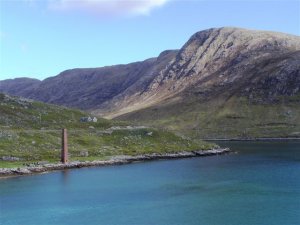 11. There’s a lot more to the Hebrides than just beaches, birds and Caribbean colours. Most people know about tweed but did you also know that there used to be a whaling industry on Harris? This is the old whaling station 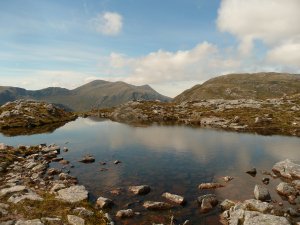 12. A driving tour of the Outer Hebrides won’t give you any views like these. The hills of Harris are a stunning wilderness playground to explore. 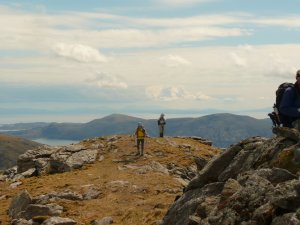 13. Exploring the hills of Harris. Watch out though there are few if any way marked paths which might come as a shock to some of our continental visitors. 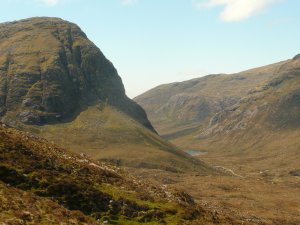 14. It’s views like these of the hills of Harris which are far less common in the promotional material of the Hebrides, which tends to concentrate on the beaches and seascapes. 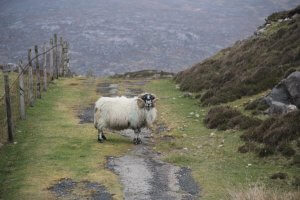 15. Of course no set of images of the Hebrides would be complete without one of sheep. Sheep are everywhere in the Hebrides but at least they are somewhat profitable in the wool which can be used to make tweed 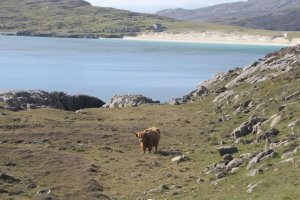 16. One of the local residents observes the tourists disdainfully from his/her comfy abode. 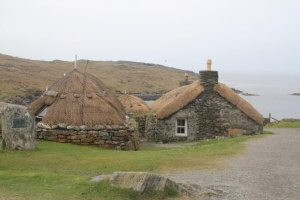 17. The traditional thatched cottages of the Hebrides; the Blackhouses cause many a tourist to sigh romantically – but these were genuinely home to many islanders a relatively short time ago. 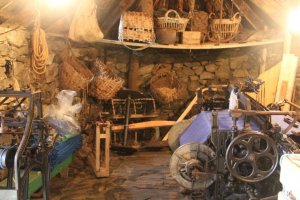 18. A weaver’s cottage on Lewis where the world famous Harris tweed is still made on the traditional peddle loom. The tweed can not be called Harris tweed unless it is made in the Hebrides on a manually powered loom. 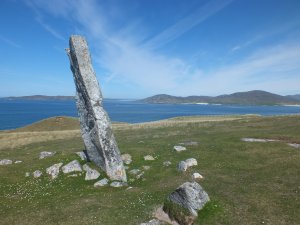 19. It’s the cloud wisping across the sky which makes this image of Macleod’s Stone so evocative. I’m sure there are plenty of images associated with it. 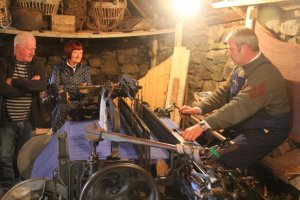 20. Weaving in progress on Lewis. The majority of Harris tweed is now made on Lewis and though has been prized by fashion designers the physical process of producing Harris tweed is not attracting as many artisans as its popularity would indicate. 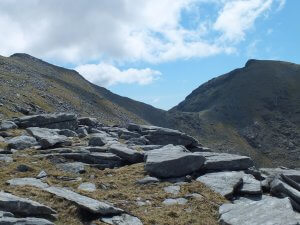 21. Heading for the tops of the hills on Harris. There;s much more to the Hebrides than just the beaches. Though much or the Hebridean islands are flat and denuded of trees, there are also a surprising number of hills to explore of selected islands.

We have set up a Google album for our Hebrides photos into which we’ve gathered this year’s photos (which have been shared with us along with our own). We’d be delighted if you wanted to add any of your photos here.

Sincere thanks to all who have joined us in the Hebrides and particularly those who have shared photos with us, some of which are highlighted above. Credits include: Looi Oon, Mick Wansborough and Tina Duren along side our own images.

Have you heard about Torridon?

Why go on walking holiday? 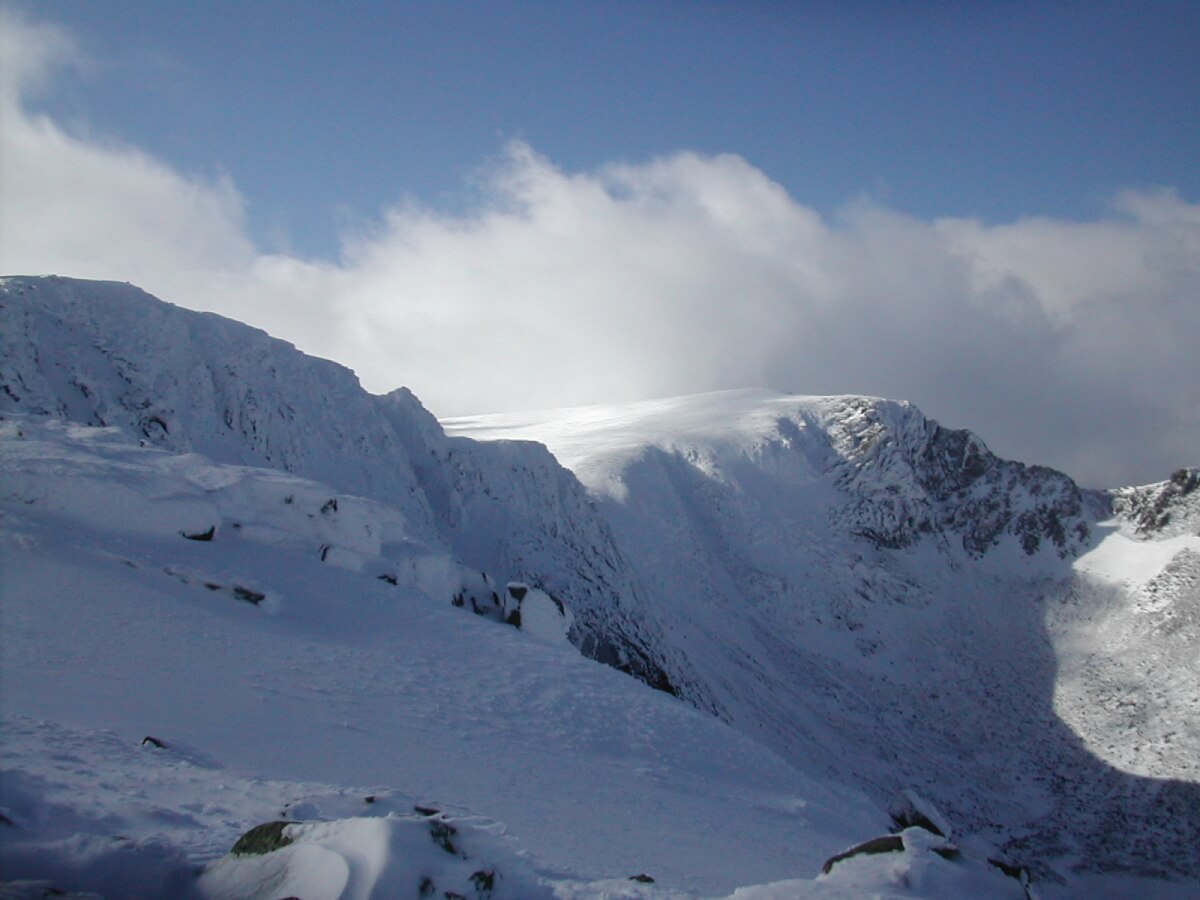 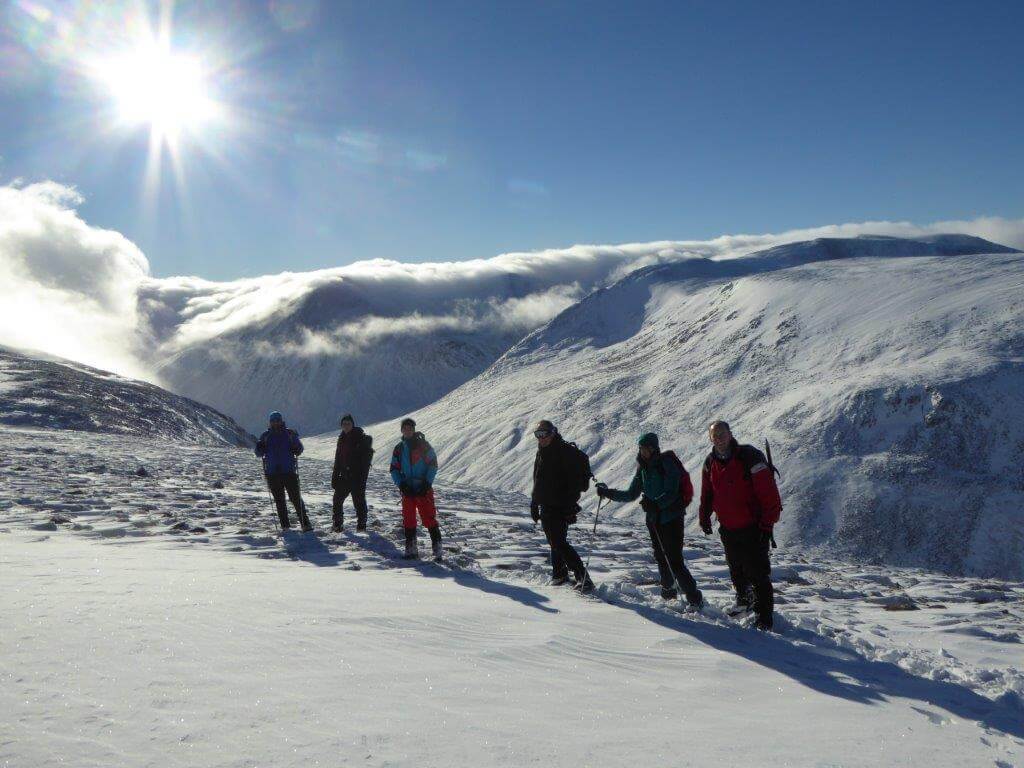 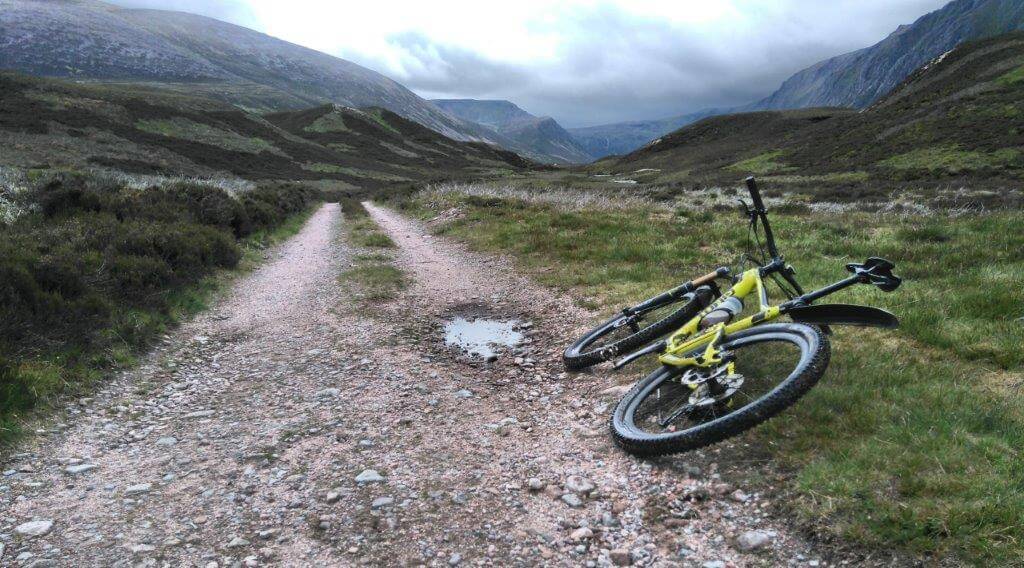 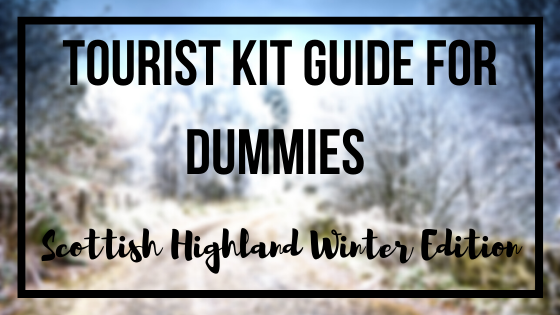 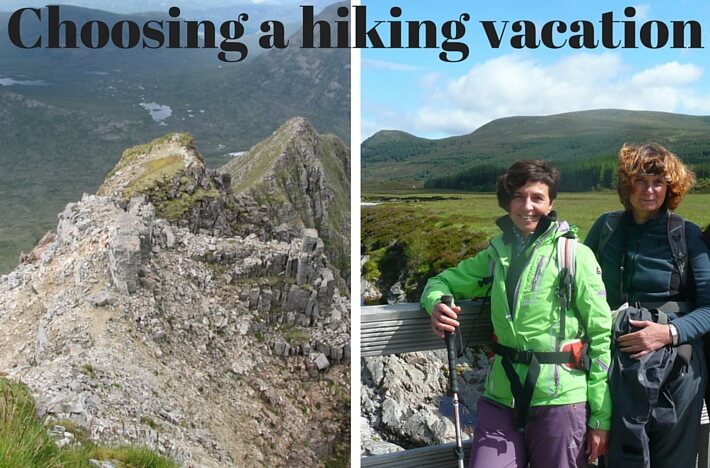