Why go Munro bagging in the autumn?

Autumn seems to be racing up right now. Munro bagging in autumn has it’s own rewards. The day’s are starting to draw in but it’s not necessarily a bad thing. The leaves are starting to turn on some of the trees here in the Highlands bringing splashes of bright red to the landscape. The later start to the day means we’re approaching a time when we’ll be able to see the colours of dawn. We can already see the evening colours (when there are any) without being up late into the night. The cooler temperatures mean we can get the fire on once more and dust off the pie recipes.

It’s a fantastic time to get out in the hills and maybe bag a few Munros. Here’s a reminder of why autumn is a great time to be out and about if you can get away outside of the school holidays.

Review: Autumn Munros – munro bagging in autumn in the Highlands

Paul Chapman’s first walking holiday in Scotland was on the munro bagging week we run in Autumn. Paul has now been on several holidays with us including recent trips to Arran and the Outer Hebrides. Here’s his review:

My first walking holiday with Scot Mountain Holidays was “Autumn Munros”. I had never walked in Scotland before then and was looking forward to some excellent walking. I finished the holiday having experienced a lot more than that. 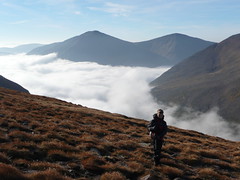 We were three days into the holiday doing Craiggowrie. It had been a lovely autumn day, the walking had been everything I hoped for. Late in the afternoon, with the light beginning to fade we started to make our way off the ridge and down into a corrie. As we started our descent; we saw a group of white snow bunting busily feeding among the heather.They were not really very bothered about us, but as we stood and watched they suddenly took off in alarm, flying low over our heads. Looking up we could clearly see a Golden Eagle soaring effortlessly above us. It had obviously spooked the bunting. You hear about these birds and see pictures of them, but standing in the heather on the side of a Scottish mountain watching one soaring effortlessly above you is an experience that can’t be forgotten.

We continued down towards the floor of the corrie, but then a couple of hundred metres ahead of us saw a group of red deer. There was a stag and a number of hinds. As I watched he calmly led his harem away from us, head held high displaying his magnificent antlers, confident that he was the monarch of the glen. At that point I knew what proud meant. As we stood and marvelled, a second stag with his own group of hinds appeared on our right, equally as majestic and again with a full head of antlers, and he too calmly led his hinds away from us and over the hillside. 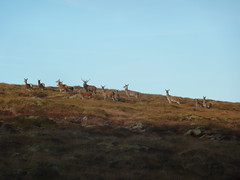 A herd of deer watch the munro bagging walkers nearby

We continued on, reaching the floor of the corrie as the light faded and soon had to use our head torches. As we walked out of the glen the light disappeared completely.We walked along the track in pitch black with just the light of our torches to show the way. As we walked I could see nothing except a small circular pool of light created by my head torch. Then I started to hear noises. It was a stag roaring in the night, seemingly not far from us. As we continued, more stags started to roar and I looked up. All I could see were the eyes of the deer, like red pin pricks shining through the black of the night.

The volume seemed to grow as we walked through that dark night. Although twenty minutes before there seemed to be two stags and a dozen hinds on the hillside. The deer seemed to be many hundreds of metres away from us. Now there seemed to be many, many, more, close to us, all bellowing into the night. Later I was told that they roared to control their harems. It was rutting season. Whether I was there or not was of no interest to them.

As I thought about the experiences of that day I knew I was hooked on Scotland.

I’ve been back 5 times now and never been disappointed. I may be a “townie” but always feel a lot nearer to nature when in those hills. Each day there is worth innumerable days in a busy, congested city. Now I just keep looking forward to my next visit.

Check out the Autumn Munros itinerary

For full details on all our walking holidays

Have you tried any of our self-guided itineraries?

Choosing a walk in the Highlands: which area?