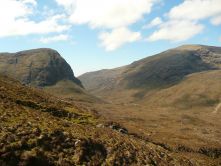 Scot Mountain Holidays put a new trip together this year (2013): an exploration of Harris and Lewis.  As usual, this was very well planned and the logistics carefully thought out. We departed their base at Boat of Garten, picking up clients at Aviemore and Inverness stations, before driving to Ullapool. There we boarded the ferry to Stornaway, for which we arrived in plenty of time.  On the crossing, there was time to admire the receding scenery of the northern mainland mountains and the approaching islands silhouetted against the setting sun, as well as to enjoy a meal on board. From Stornaway we then took an interesting drive down to Tarbert, our base for the week in some well-equipped holiday cottages.

The beginning of the hiking

Andy had prepared a very varied itinerary, a pleasant blend of hill and coastal walking, with visits to many places of interest. As always, he was a mine of information on the geology, the geography, the flora and fauna and especially the bird life.  Among other species, we saw lapwings, golden plover, cormorants, gannets fishing, a Great Northern Diver and, of course, at least half a dozen eagles …. 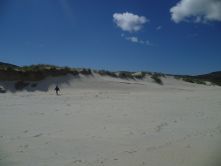 On the midweek ‘rest’ day, we had the opportunity for a scenic drive around south Harris. We visited a prehistoric standing stone and also a visitor centre. I was intrigued to discover why Lewis and Harris have separate names, even though they are one landmass. In former times, there were no roads through the hills forming a barrier between the two, so all the traffic had to be by boat around the coast, effectively making them separate islands!

We also discovered that the island has become something of a haven for artists and photographers. There are quite a few studios dotted around, often with hospitable cafes! For the botanist, the coastal scenery is much enhanced by the ‘machair’ wild flower meadows.

Other points of interest

There is much of interest too for the historian: the famous prehistoric standing stones at Callanish, an Iron Age ‘broch’ (chieftain’s house) in a well preserved state, and more recently the ruins, mainly just a chimney, of a former whaling station; there is even a present-day indication of long-established customs in that many people still cut and dry peat for fuel!

I have so far not mentioned the hillwalking, which can be very challenging even though the hills are not of the highest, due to the dearth of paths and tracks, giving one a real feeling of pioneering. And:

“These mountains don’t know they’re 2000 feet high, from the rock

Of the summit, where the clouds cling, down to the lap of the loch.

In their mist shawls they crouch, silent, by the side of the glen,

Indifferent to Man and the measures of men.” 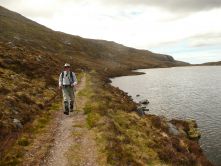 Even dedicated ‘Munro-baggers’ would find much to enjoy here, since the terrain is very rugged, the ascents are often steep and one usually starts from sea level. Coupled with the remoteness of the island, this means that we encountered few other walkers during the week.

Probably my favourite ascent was that of Tiorga Mor. After an interesting walk up the valley track, we turned on to the mountain shoulder. This gave some superb walking up ‘boiler-plate’ slabs, with occasional delectable little scrambles, to the summit ridge.

From the top, we had extensive views over many islands, including Taransay (of TV’s ‘Castaway’ fame) and even St Kilda on the far horizon. Looking down on the white sand beaches and the turquoise sea-shallows it made me think of Greece, another country which I love. From the summit, we turned north to traverse Tiorga Beag and eventually started to get increasingly dramatic profile views of the north end of Sron Uladale; this is of particular interest to those of a rock-climbing bent, as it is the largest crag overhang in Britain.  Some brave soul has even jumped off the top with a parachute!

Complementing Andy’s expert and informative guiding was the magnificent cuisine produced by Rebecca. After a substantial breakfast, we had a wide choice of fillings for our sandwiches. We assembled our own lunches with the fresh home-baked bread. On our return to base, we enjoyed the famous ‘Cake-o-Clock’: refreshing tea and home-made cake, before the excellent evening meals. 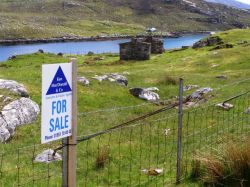 Apart from the main scenic delights, there were other intriguing little sights for those of a whimsical turn of mind:

a well-maintained tennis court miles down a single-track dead-end road, probably the most remote such facility in Britain, if not the world; and an optimistic ‘For Sale’ sign in front of a derelict cottage

On the return ferry there was of course sadness at leaving this unique place, but also compensation in the approaching views of the northern Scottish mountains across a sun-smeared sea.

Overall, this was a very interesting and enjoyable trip, underlining the Scot Mountain Holidays slogan: “A Sense of Place and Belonging” It is an expedition well worth repeating.